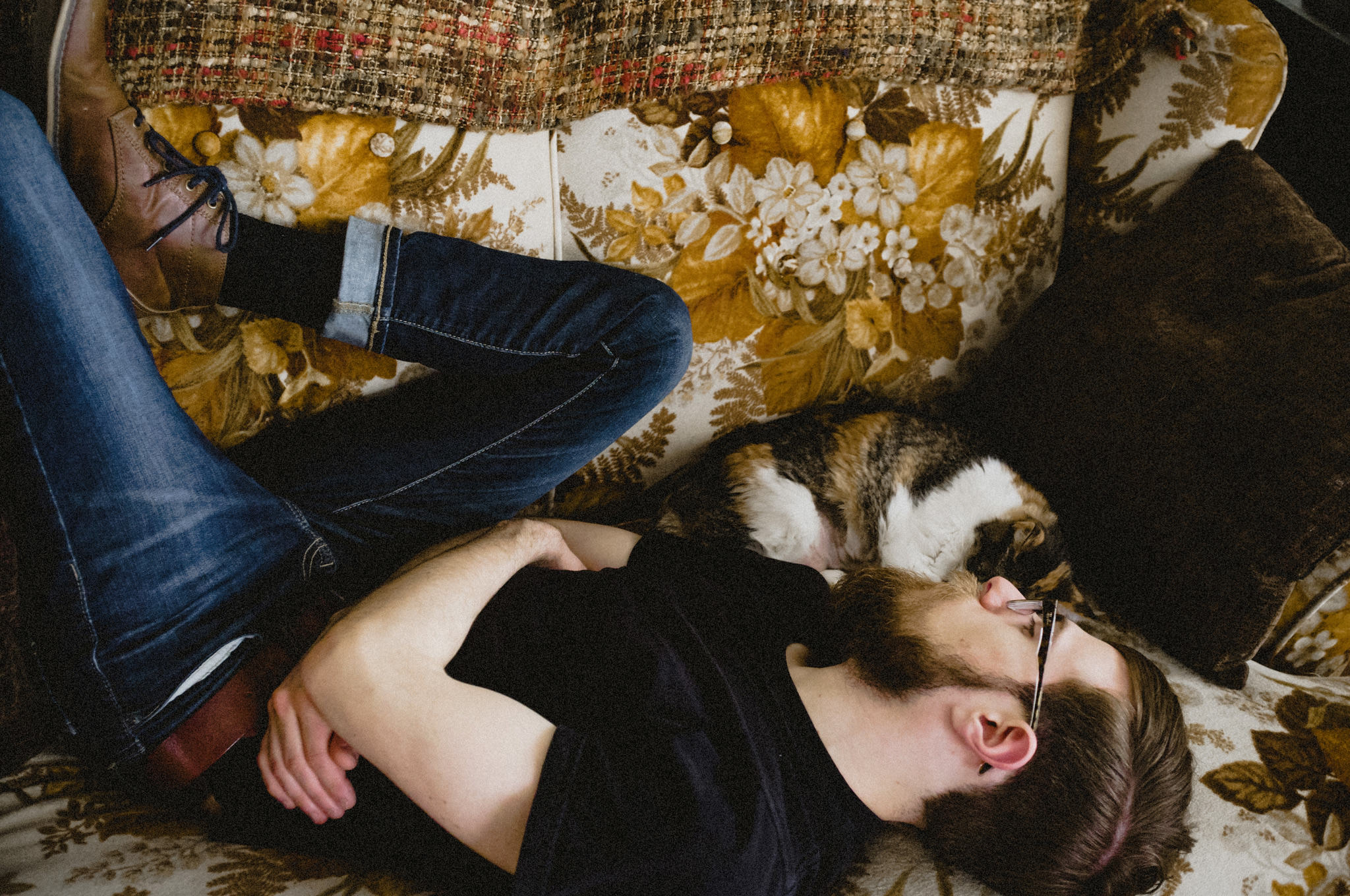 My Last Photo With Lolita

I had nothing but Radical Face playing on the stereo while I soaked everything in.

This is literally the last photo with Lolita and I.

Amanda snapped a few before we headed out. Aside from this being my favorite of the few she took, this was literally the last photo taken. I brought my camera with me as usual, but didn’t have it in me to take any at the vet’s office or even on the drive there. I wanted my last photographic memories with her at home. I have a few frames left on my various film cameras, so I’ll finish those up soon and ship them off to my lab to get processed.

I’m weird when it comes to death. I don’t like to see bodies. I find funerals to be strange. Maybe it’s because I grew up around all that and still am around all that since my dad works at a funeral home. I don’t know. Either way, it weirds me out. I remember when my grandpa died, some of my family were sad that I didn’t go and see his body. I guess I don’t need that sort of closure. Maybe it’s because photographs serve that purpose. I’m all about the memories.

So, today we dropped her off at the vet. We sat in the room a bit, but I didn’t want to stay very long. It would’ve only hurt me more. I spent all day at home by her side. I also didn’t want to be there when they put her to sleep. I trust them and the vet. They were incredibly nice and understanding. The vet described what they do, which at first I didn’t want to hear, but it actually made me feel much better knowing. He then asked me what my favorite memory was with her. I told him about when I first had her she would go to the kitchen and open a drawer with her paws, then go to the dinning area and get into a pounce position. Then after a few seconds would run and jump into the drawer so hard that it would shut. Then, she’d just lay in there for a few minutes until she was ready to come out. Lol. She that a lot for the first few years I had her. Ugh… the good ol’ days.

I told the vet that I wanted her cremated, but I didn’t care to get the ashes back. Once again, I’m fine with the memories and the photographs.

I don’t feel bad about anything. She was suffering, there isn’t a cure, and there was nothing more to do. She was practically bones, but she was still in good spirits. She was purring all day.

I feel I’m taking everything better than I had thought. Maybe it’s because I had plenty of time to spend with her. Being home is a little tough for me right now. After we dropped her off, we went for a drink and some food, but as soon as we got home, I saw the bedroom and the couch and lost it. I got both of those at the same time she came into my life. So, looking at them just instantly brings back memories. Especially since that’s where she had been laying for the past few weeks.

All and all though, I’m good.

I’ll end with this.

I feel incredibly grateful and loved. I’ve been sharing all this because Lolita was a huge part of my life. Sharing photos and writing about it all is therapeutic for me. I was never looking for sympathy or trying to bring anyone down by sharing it all. I just needed to get my emotions out there. I want to show that it’s okay to have feelings and share your emotions via social media. I feel that social media has this way of making all our lives seem like a party 24/7. Hell… sometimes it seems as though it’s even filled with a shit ton of stupid, meaningless drama. And I’m not saying I’m depressed or sad all the time, but we are all human. And we all struggle from time to time. And that’s okay. And sometimes… yes… we party. Lol. You get some good tunes on the stereo and few beers in my hand and I’m a happy man. Nonetheless, what I’m getting at, is that I want to thank everyone for their condolences. My Facebook messenger is filled with read and unread messages, as well as comments on all the photos I’ve been posting. I wasn’t on the search for any of that sort of attention, but fuck… thank you so much. I’m so grateful for it and feel loved. I appreciate it more than you know.

Cheers Lolita. This beer is for you.